Living up to its reputation as a trendsetter for student activities, Department of Electronics, Mehran University organized a One Day MATLAB competition on 6th of March 2013 to provide students with a platform to exhibit their technical programming skills, logical understanding of the problems at their hand and to nurture the competitive spirit among the students. A total of 22 Teams and 44 students from the Faculty of Electrical, Electronics and Computer  Engineering (FEECE) went toe to toe in a battle of intense programming skills at the MATLAB COMPETITION 2013. 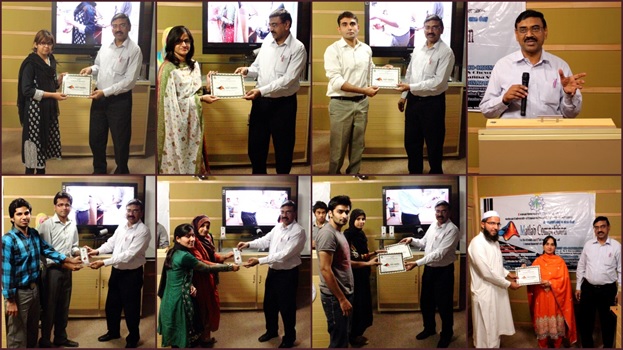 The venues for this competition were Cyber Interactive Lab and Digital signal Processing Lab at Department of Electronics where students were provided the latest issue of MATLAB version 8.0 R2012b with all its toolboxes to solve complex and convoluted problems related to their respective fields.

The competition was based on 3 rounds, cumulative scores of which determined the Winners.
1st Round was a Quiz round at which students were given a MATLAB based program in which 100 questions were to be answered in 30 minutes with a 25% negative marking criteria. Top 15 teams which scored most points proceeded to the next round and 7 teams did not qualify to proceed further.
In 2nd Round, 15 Teams were given 5 very complex problems to make a function of and allotted 90 minutes to do so. Upon time completion, a team of evaluators comprising of Dr. Imtiaz Hussain Kalwar from Department of Electronics and Dr. Faheem Umrani from Department of Telecommunication judged and evaluated the functions developed by students on basis of their implemented logic, algorithm, user friendliness and general clarity of their functions. After a long and tough evaluation process, evaluation team chose 7 best programmers to proceed to the Final round.
In 3rd and Final Round of the Competition, the students were given an elusive task to choose a category and then solve a Graphic User Interface (GUI) based design task in 30 minutes. Upon time completion, the Final round Evaluation team comprising Dr. Imtiaz Hussain Kalwar and Engr. Khuhed Memon from department of Electronics evaluated the developed programs on basis of their algorithms, user friendliness, ingenuity and creativity of logic and appearance of the GUI.

It was a hard fought competition and a good one at that but it only became possible due to massive support and supervision of the Chief-Coordinators Dr. B. S. Chowdhry Dean FEECE, MUET and Dr. Wajiha Shah, Chairperson Department of Electronics and due to incessant struggle and unparalleled  support of Coordinators of the event namely Engr. Yasmeen Naz Panhwar, Engr. Saba Baloch, Engr. Khuhed Memon and Engr. Azam Rafique, who left no stone unturned to make this event a reality and the efforts of the student organizers namely Summaya Laghari, Maria Panhwar, Aqsa Anwar, Saddam Hussain, Najeeb ur Rehman Malik,  Awais Memon, Mohammad Nouman Khan and Mohsin Shaikh.

Winners were awarded their winning shields in the closing ceremony held at video conferencing hall, which was hosted by Faraz Shaikh. Dean FEECE Dr. Bhawani Shankar Chowdhry and Chairperson of Electronics Department Dr. Wajiha Shah did the honors of presenting the shields to the winner and runner ups of the event. In his closing remarks Dr. Bhawani Shankar Chowdhry hailed the efforts of the Coordinators and organizers for the competition and promised his support for all their future endeavors.